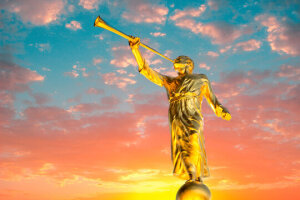 Liahona passed away peacefully at home on Tuesday, July 19, 2022. Her life exemplified traits of her Dutch heritage of which she was always proud: hard work, resilience, strength of character, forthrightness and tolerance of others. Her loving personality, religious faith, openness and devotion to family and friends were distinguishing personality traits. She had a vibrant love of living things including a myriad of pets and plants that surrounded her. Her greatest joy was the people in her life. She was blessed with a large family and wonderful friends. Her love language was service. Some of her favorite activities were helping people become homeowners, working with cub scouts to prepare for the boy scout program (including her own three eagle scout sons), running local Red Cross blood drives and serving as head cook at girls’ camps. Her husband Neil was proud of how she planted trees everywhere she lived, turning ordinary lots into little pieces of paradise. Using Mark Twain’s phrase to describe her he said, “Wherever she was, there was Eden.” He was immensely proud of her. In his personal history he wrote “Liahona has a very strong testimony of the Gospel and has always had church jobs and done them well… She’s always taken her church callings very seriously.” Liahona and Neil were lifelong devoted members of The Church of Jesus Christ of Latter-day Saints.

Liahona was born in Amsterdam, the youngest of eight children. Her parents named her Liahona, from the Book of Mormon, which referred to a compass or a guide. She was a living light and guide to her seven children and to many that sought her light. She and Neil loved the Monterey Peninsula and her light was often like the light of the Pacific Grove lighthouse, whose purpose was to guide others to safety. Her compassionate heart offered refuge to those who needed comfort and hope. Her children consider her their rock. Their dad inspired them, but their mother gave them the toehold to take off. She always encouraged them in their own interests, resulting in a diversity of careers and life choices they made.

When Germany invaded the Netherlands in World War II, Liahona was seven years old and for the next six years would live in an occupied country. The experiences of these years had a lot of influence on her strength and faith today. She had to adjust to a new culture when the family fled the big city, for a village setting in Monnikendam where most of the kids were children of fisherman and taunted her for her city accent. She showed symptoms of tuberculosis, so she had to sleep outside in a tent in her backyard; her big sister Antje slept outside with her. She was terrified by the occasional dogfights overhead and was afraid shrapnel would fall on them. As it turned out, her father had been part of the resistance movement, along with many other “Frisian” Dutchmen. The last year of the war, millions of people starved during the Dutch famine of 1944-1945. She was so thin, she was sent off with other children around Europe for six months to the English countryside to regain her health. The war was over in time for her to complete two years of high school; then her parents returned to Amsterdam to prepare to emigrate to the Rocky Mountains of Utah. Her months in Amsterdam meant actively participating in church activities with other teens who became lifelong friends, and she served as the organist in the Amsterdam branch of the Church. Also, she belonged to a nature club that frequently biked across Holland, camping in farmers’ barns along the way. She could identify every plant on sight in Holland, and was honored in her high school assembly by the principal for that achievement.

Her family ended up in Provo, Utah where she finished high school while working at cleaning homes and offices along the way to contribute to family finances. When she was a freshman at BYU she met Neil Christensen, a UC Berkeley student, who was doing student teaching in Provo. Their marriage was solemnized in the Salt Lake Temple. They began their married life in the San Francisco Bay area, residing in Berkeley. Liahona was thrilled to have her first home in Walnut Creek, after the arrival of their 2nd child. Neil then suggested they buy the house next door, and Liahona uttered the famous words,  “Who needs two houses?” (In Holland, you dreamed of having one home).  They proceeded to buy many lots and build houses around the foothills of Mount Diablo. They developed streets around the San Ramon Valley now named Provo Lane, Cumorah Lane, Brigham Lane, Manti Terrace, Logan Lane and Timpanogos Lane. They chose to live on hilltops themselves and now four generations of their family have lived on those hills. They were married for 37 years, and had 7 children together, before Neil passed away. Liahona waited 32 years to be reunited with Neil, and we can only imagine how thrilled they both are to be back together.

Her interment was attended by immediate family and her memorial service will be held at The Church of Jesus Christ of Latter-day Saints at 2949 Stone Valley Road, Alamo, California on Saturday, August 6 at 10 am. Friends and family are warmly welcome.

To send flowers to the family or plant a tree in memory of Liahona Maria Christensen, please visit our floral store.

A Memorial Tree was planted for Liahona

Join in honoring their life - plant a memorial tree